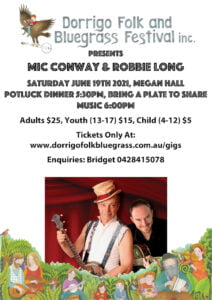 Join us at Megan Hall for an evening of music from Mic Conway and Robbie Long.

The evening will begin at 5:30pm with a Potluck Dinner around the Hall’s atmospheric dining table. Please bring a plate of savoury or sweet food to share. Music will begin at 6pm.

“Street of Dreams” is the duo collaboration between Mic Conway and flat-picking guitar champion and multi-instrumentalist Robbie Long. Stripped back, irreverent and shameless, Mic and Robbie play unusual and idiosyncratic tunes that make jaws drop, toes tap and sides split. Featuring some Captain Matchbox favourites like “My Canary Has Circles Under His Eyes” and a fiery version of “Masochism Tango” as well as a swag of Conway including “Jug Band Man” (which was featured on Spicks and Specks).

This is Mic the crooner – inspired by Al Bowlly, The Ink Spots, Fats Waller and the Hoosier Hotshots. From the moody and dark “Street of Dreams” to the illusions of life and showbiz in “Paper Moon”; from the sculptural and pun-filled construction of a spare-parts lover in “The Dummy Song”, to blaming a building for the loss of love in “Winchester Cathedral” – these are songs with strange, dreamlike images. Some classic tin pan melodies, some bizarre originals, “Street of Dreams” is surreal vaudeville with a sense of humour. Croon to melt your ears. The duo has already graced the stages of Melbourne’s Comedy Festival and the Melbourne Cabaret Festival, as well as a swag of other events from Darwin Festival to Cobargo.

Mic was born into a family of vaudeville theatre and opera. In the 1970s, together with his brother Jim Conway, Mic founded the Captain Matchbox Whoopee Band. To their surprise it became a cult phenomenon, recording seven records, two of which achieved gold status. Mic also joined the legendary Pram Factory Theatre in Melbourne, creating Soapbox Circus, where he was ringmaster, musician, juggler and acrobat. In 1978 Soapbox became the now world famous Circus Oz of which Mic was a founding member.

Mic has toured across Australia, Britain, USA, New Zealand and Asia delighting audiences of all ages. He has written and recorded many albums and worked across the board in theatre, music, cabaret, television and film.
His current outfit, Mic Conway’s National Junk Band is successfully touring and recording the most unique music and entertainment that “defies categorisation” (Sydney Morning Herald).

The event is finished.